Pushing the Bike Industry with a Brand New Passion 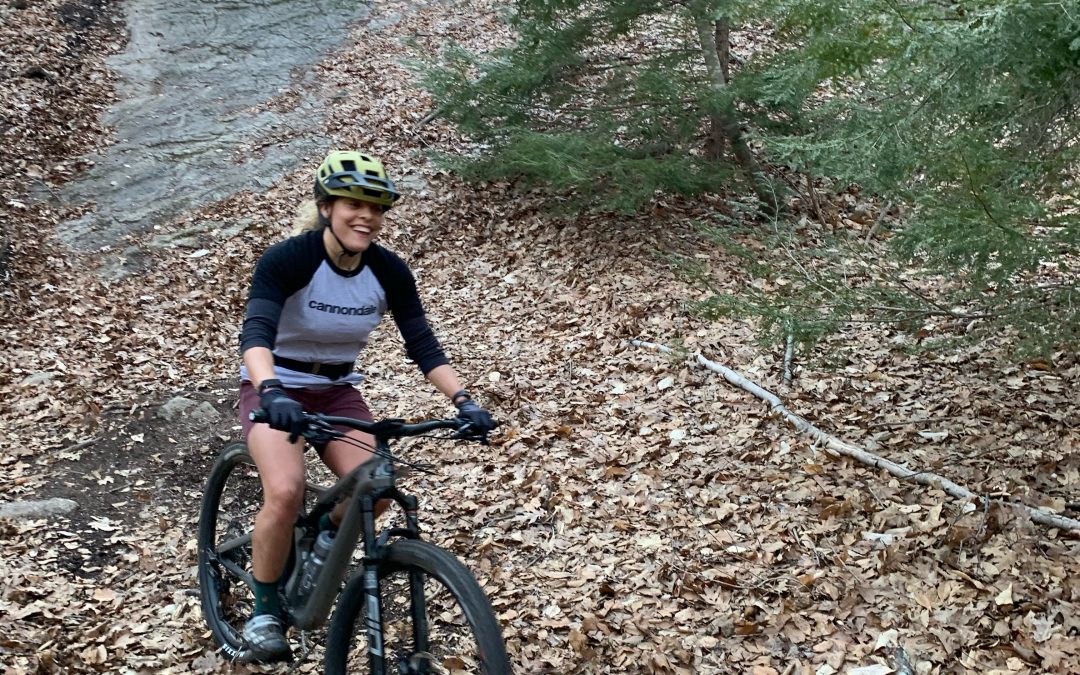 “You know what? God, I have no idea, just give me some brand new passion.”

After finding herself dissatisfied while pursuing a rock climbing coach career and working sales at her local REI, Johnson took a step back. “I was all over the place, always stressed about what I was going to do.” That is, until this past year.

When Johnson’s local REI in Connecticut asked her to return to work, she agreed, but on one condition: “I’ll come back if you only put me in the bike shop.”

Johnson enjoyed every moment working on bikes with the other mechanics, asking questions and learning hands-on about the nitty-gritty of bike construction, repair, and maintenance. “I’m a very visual, tactile learner,” Johnson remarked, “so I started [building] pre-factory installed bikes. Half of it is pretty much done, so I did wheels and re-torqued everything.” Johnson worked at REI until recently when she became an Ambassador for Cannondale bikes. This exciting endeavor opened the door for a new opportunity to work as a mechanic at Benidorm Bikes in her hometown of Canton, CT.

While it may feel like a shock to now be so invested in the bike world after only a year, Johnson feels right at home. “I love being pushed out of my comfort zone.” This is what she loved most about being a Sherpa, too: “When we were on trip, every time, I’d have someone that was like, ‘I can’t make it,’ crying, … And then they [make it]! Every time!”

These are the moments that Johnson cherishes. “I really love the growth that happens,” she said, “And I feel like if more people experience that, you grow in those really hard times.”

These inspiring moments from her time as ADK staff have shaped her outlook on growth through challenge, which she believes “applies to all aspects of life.” With her newfound passion for biking, Johnson now is considering what it would look like to challenge the bike industry.

“When I started biking I was like, ‘I really think I can change the industry in a good way… I think I want to do something a bit bigger than what I thought I would do in climbing … I think I actually want to be in charge of something in the bike world.’” After taking a few years to hone in her mechanic skills and receive formal training, Johnson dreams of owning a bike shop. “There’s so many directions you could go within owning a shop. I think being a woman and owning a bike shop is one thing, and also being a person of color is another. That itself has so many doors you can enter and open.”

Just like urging a participant on the side of a mountain towards hard work and incredible rewards, Johnson sees the potential in working hard to push the bike industry for the reward of diversity and inclusion. She shared, “I’d love to have a shop someday with mainly female mechanics, and have a ride for women, and a ride for people of color, and a ride for kids.”

Johnson is not only passionate about bikes, she is passionate about making spaces for all people to enjoy the sport she cares about. Commenting on getting opportunities to ride with other people of color, she said, “it feels like this environment that you don’t normally have, when you have the ability to just ride. You have a general understanding of what it means to be a person of color in this time period, and you don’t have to explain yourself, which I think is the beauty of getting to ride with people who look more like you.” She also wants to challenge a white-predominant sport, asking that those who enjoy the sport take part in sharing it by leaving “space for people who don’t look like you to have a part in what you like to do.”

For Johnson, this looks like entering bike shops and asking simple questions. “Some of the questions that I ask no matter what I’m doing are ‘where are the women? And where are the people of color?’ Those are groups that are so personal to me, as well as individuals with different abilities.” She cites Ayesha McGowan and Brooklyn Bell as inspirations. McGowan “just became the first Black female pro road cyclist, and Bell is a pro mountain biker. They’re both crushing it, riding really hard. I feel like they are asking similar questions, [saying], ‘Let’s include all these people in our sport, because it’s changed our lives.’”

Ultimately, from trip-leading on the trails to wrenching on bikes as a technician, Johnson’s newfound passion is rooted in her ever-steady love for challenge and change. “I really love being challenged, I love challenging others, because I think you grow there. That’s the same thing for the cycling industry. I felt the same way in the climbing industry. I love going in like, ‘let’s look at this common sport and let’s try and change that.’ If you change it, it has the opportunity of being better and more inclusive for more people. And I just love going against the grain.”