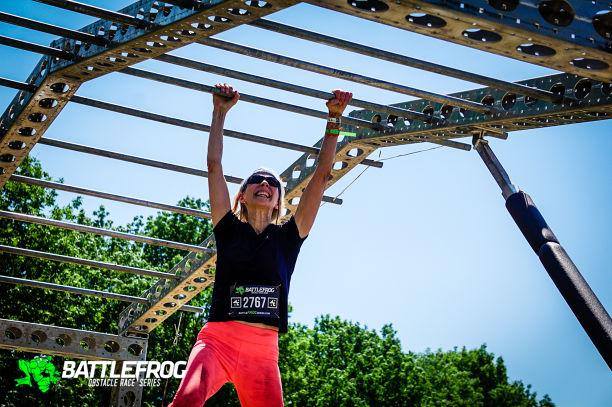 Imagine yourself doing a three mile run, interspersed with “20 obstacles–including crawling through mud under barbed wire, climbing ropes, climbing over walls,… a balance beam, going through big mud puddles, … a 14 foot high platform …to jump into a puddle!”

Now, imagine your grandma doing all of that.

This is what Diane Perkins Castro, author of two books (Reflections of a Tomboy Grandma and Confessions of a Tomboy Grandma), and member of the first and second all-women La Vida trips, does in her free time. She, together with her eldest daughter, jump right in (literally) to what many people would readily hold at arm’s length. And not only do they have courage to face the challenge, they find joy in it.

In a recent interview with La Vida, Castro shared about her lifelong journey of not only choosing challenge, but choosing joy amidst challenge. From her La Vida solo, to digging deep into her faith, to having completed over fifteen obstacle races, she offers an example of what challenge by choice can look like in our everyday lives: not just opting into or out of challenges, but accepting life’s challenges with joy.

“It just rained all the time!” Castro proclaimed, remarking on her second La Vida expedition. It was the summer of 1989, and she had completed the first all-women’s hiking trip a year earlier. But this year, it was much wetter. She remembered distinctly laughing about one of her La Vida lunches:

“One meal we had was crackers and canned tuna and velveeta cheese. We were talking about having ‘tea-time with tuna melts!’ And here we are, it’s raining, everything’s soggy, the crackers are soggy, and yet we could still find joy in that.”

Even with soggy saltines, Castro found the rain to be a catalyst for her biggest La Vida lesson: Choosing Joy. She came on La Vida after being connected to Gordon College through her husband, who was a professor. When she heard about a women’s hiking trip offered, she eagerly signed up. “I thought ‘well that’s right up my alley!’ because I like outdoors, I like adventure, I like new experiences.” Her first trip was in the summer of 1988, and while “being with other women, being out in nature, pushing ourselves to do things that we don’t do in our ordinary lives,” Castro and her companions were able to say “Hey, I can do this! I do have strengths that I didn’t know were there!”

The eight day trip was perfect for the 13 women, many of whom were able to step back and reflect on how the wilderness directly impacted the trials they were facing in their lives. For Castro, she was facing the challenges of mothering five children below the age of nine. Rock climbing, doing a ropes course, and hiking with the other women gave her a new perspective on coming back “down off the mountaintop, literally and figuratively, [to] …face the same old things. Nothing [had] changed, but you can approach it with a different attitude, and I can’t say that it was a 180 degree turn, …  but I think there were certain key principles that stuck with me.”

For Castro, these principles were enough to decide to go back the following year, this time for a canoe trip. However, her second year she was faced with a whole new set of challenges. She explained, “the challenging part of that for me was the portages. I learned that I couldn’t carry it the whole distance but I could put one foot in front of the other, and just keep doing that, and I would get there!”

Not only so, but “the second year it was rainy. My second year solo was really the most meaningful for me. I really thought a lot about that idea to choose joy. Joy isn’t something that just happens to you when all the circumstances are right, but it’s something that you can choose at any time. So you don’t have to wait until you’re on the beach with a good book on a sunny day. You can choose joy when you’re lying on the ground in a soggy sleeping bag in the rain!”

During that solo period, Castro used her time to pen her reflections, and after her trip, returned to her ideas to write them out more fully. Incredibly, she kept her solo reflection on “Choosing Joy” so close to her heart that, “fast-forward almost 30 years, I was writing my first book. And that experience on my solo was really special and I used what I had written there as the basis for two chapters in my book … and then continuing on two more chapters on the same [topic] with things that I had learned since.”

The practice of writing as an art of reflection and processing was not just something that Castro did on her sopping wet solo–she kept it going, especially as she was experiencing doubt and questions in her faith. “I process things by writing. So I just started writing essays for myself to be able to put into concrete form what I was thinking … I started writing these essays and then I really didn’t share them with anybody. But, in the fall of 2011, I started a blog.” This blog became the basis on which she posted over 100 essays on her reflections on Christian faith and life, which eventually turned into her now two published books.

Castro’s growing discipline of choosing joy has continued to push her towards choosing into challenge. From her La Vida experience, she was able to learn and grow by challenging herself physically and spiritually. She has applied principles to her parenting that have allowed her to stay close to her now six children and eight grandchildren. And beyond being able to complete feats of strength and determination through obstacle racing, she is also able to invite others into the joy of facing challenge:

“I have a friend who had gastric bypass surgery about 3 years ago now. And so I gave her a challenge. ‘In one year from now, from the time of your surgery, come and watch the Wason pond pounder, and two years from now, do it yourself.’ … So, we did the Muddy Leprechaun in Ipswich! … She made it through the whole course … It took me back to the challenges on La Vida. … Not only was it good for me, but something that I could encourage someone else to do, something that she never in a million years would have dreamed she could do,” but now, she is able to do so by choosing joy.