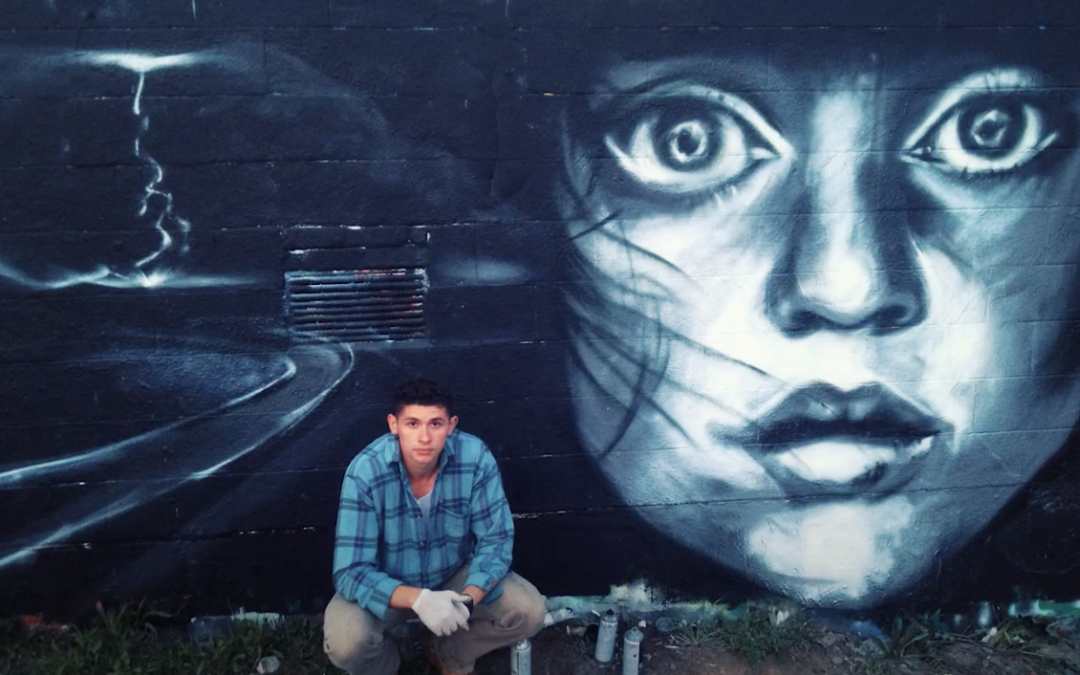 “For we are God’s masterpiece. He has created us anew in Christ Jesus, so we can do the good things he planned for us long ago.” // Ephesians 2:10

If you have spent any time reflecting on the last year, at one point or another it is likely you have asked yourself, “What is God doing?” or, “Why is this happening?”

Sometimes, it has felt like we are monopoly pieces on a large board – moving, staying, going bankrupt and trying to build strategies even when we don’t know what is coming next. We have had to face the temporal nature of humanity and witnessed more grief than many of us care to admit. And in the middle of it all, we have wondered: “Is there really a bigger picture?”

A professional mural artist, Popa has spent the last eight years navigating big pictures bit by bit, both in his artwork and in his personal life. God has culminated his life experiences towards his current body of work, and he says it all started with his father:

“He was born in Bucharest, Romania, came to New York City when he was quite young…had a tough childhood, grew up in a divorced household, and at age 12 or 13 finds himself actually doing graffiti as one of the first graffiti artists in New York City,” Popa explained. One day, “he got arrested, and these police officers challenged him to be an artist and to go away from graffiti. So my father’s an artist, my great grandfather from France was an artist, and my grandparents were professional ballet dancers…art was just all over.”

Even though Popa grew up surrounded by art, “it never really clicked…because there was a key missing ingredient. I had a gift, and I was ingrained in that world, but actually I wanted to go to the military because I wanted to have more adventure.”

Popa’s longing for adventure started at a young age when he and his brother would seek refuge in the woods amidst the city that never sleeps. “There was this one nature preserve that we would go to, and if there was anything man made, we were just so upset.” As a child, these moments outdoors represented a “kind of first love and first kind of purity.” He was constantly trying to engage with the outdoors, which often felt contrary to his natural giftings in the arts.

Popa shared that God opened the door for him to attend Gordon College where he was an art major; however, he had no plans of being a professional artist. While meeting with his advisor, his advisor asked if he’d be going to Orvieto, Italy like all the other art majors, but Popa responded “No, I think I’ll do the W.I.L.D. semester!”

These two sides–longing for adventure and a gift for art–continued to pull at him until one day, his friend invited him to go to the Beverly Free Wall, a legal graffiti wall near the train track in Beverly. Popa’s eyes lit up. “That basically changed my whole life when I went there. I was painting all these large murals with spray paint. It started to connect all these different elements, especially the adventure! … I eventually went from the urban context and realized my real love is actually for being in nature and the outdoors.

Thus began his current body of work, where Popa paints large murals on islands and islets around Northeastern Europe, primarily Finland, where he now resides. Using all-natural, biodegradable pigments from charcoal and water, Popa creates large, ephemeral works that are often washed away by a storm in the next week. Popa recalls times of being pushed out of his comfort zone during W.I.L.D. semester and uses this as inspiration when he is paddle boarding out to an island in freezing temperatures, unsure if his venture will be fruitful. He documents these murals through cinematography, but when he is in the rush of painting, it is just him and God. As an artist with an audience in the sky, Popa exclaimed, “he can see it better!”

Not only can God see Popa’s murals better from his perspective, but he can see the mural of Popa’s life. Every part of Popa’s past–his father’s story, his natural gifting, his longing for adventure, his work on the Beverly Free Wall and his involvement with La Vida–has worked together to bring about these masterpieces. At Gordon, his work on the Beverly Free Wall not only gave him a sense of thrill and adventure, but a concept of working with art that is temporary. “When you paint there, you can be painted over the next day. Initially that was so hard… but something kind of clicked with the idea of the ephemeral nature of the art. I didn’t end up picking it up until I came back to nature where I knew if I was going to paint on rocks, it would have to be like the way the cave painters were doing it … completely natural. And ultimately, it would have to be ephemeral.”

And yet, Popa has learned to see that ephemerality can compose a bigger picture. Through tracing God’s faithfulness, he can now realize his journey as part of a metanarrative, just like the pieces he creates. In a year of facing challenge, loss, and being unsure about the future, Popa demonstrates confidence and trust, knowing that God, the greatest artist, is painting alongside him.